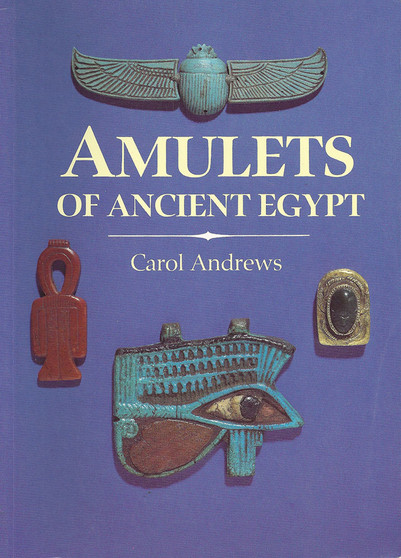 Amulets of Ancient Egypt by Carol Andrews
Amulets are ornaments believed to endow the wearer by magical means with the properties they represent. They were first made in Egypt as early as 4000 BC and were essential adornments for both the living and the dead. Crafted from gold and silver, semiprecious stones, and less valuable materials, they are fine examples of Egyptian art as well as a vital source of evidence for religious beliefs.
In this book, Carol Andrews offers the first comprehensive account of the types of amulets made, their symbolism, and their protective powers. An amuletic foot could be worn to ensure fleetness of foot, a hand for dexterity. The desert-dwelling hare symbolized keenness of the senses, and the hedgehog, which hibernated and survived outside the fertile valley, held connotations of rebirth and triumph over death itself. The ubiquitous amulet in the shape of the dung beetle, known as a scarab, was symbolic of new life. Amulets in the image of powerful gods would be worn for protection, and malevolent creatures, like the male hippopotamus, would be worn to ward off the evil they represented. Both a reference book and an informative account of Egyptian magical belief, this is the most complete survey of the subject to date.
Beautiful color photos.

A Prince of Islam by Carol Barker (Author & Illustrator)

Amulets and Superstitions by Sir E. A. Wallis Budge

Amulets and Superstitions: The Original Texts With Translations and Descriptions of a Long Series of…

Beauty and the East: A Book of Oriental Body Care by Wendy Buonaventura

Beauty and the East: A Book of Oriental Body Care by Wendy Buonaventura This fascinating story of b…

Belly Dance: A Practical Guide to Making a Belly Dance Bra and Belt

Belly Dance: A Practical Guide to Making a Belly Dance Bra and BeltThis 88 minute DVD tells you ever…

A Trade like Any Other: Female Singers and Dancers in Egypt by Karin van Nieuwkerk (Paperback)

A Trade like Any Other: Female Singers and Dancers in Egypt by Karin van Nieuwkerk (Paperback) In Eg…